Safe in the arms of Jesus

In some people’s eyes,
you really weren’t ours
In our eyes,
you were our child.
I am not the same
as before you. I
love you and think of you,
just as a mother would
If they could only see into my heart,
they would know
you are with us always
You're Safe in the arms of Jesus
Sweet baby girl. I Love You!!
Posted by Bill and Sheri at 11:28 AM 2 comments:


Today marks one year since Max became our legally adopted son. On this day (Friday 22 July 2011) one year ago we were picked up by our Facilitator who had the signed court papers and a new birth certificate that showed that Max was now  Benjamin Maxim Burger. The first thing we had to do was go by the bank and close out the account that was in Max's name. The next stop was at the orphanage, where we met with the Director and donated the money that we had just received from Max's closed account. Next we went to get Max, and put him in cloths that we had brought especially for this day. This was the first time he had ever worn cloths that were his only and not communal. We left the orphanage to never return on this trip. The next 4 hrs were long and hard. We had to have Max's picture taken (not an easy task) for his passport, complete the paperwork for it and sign more papers. At the end of the day we were given a package of papers that had to be copied and the copies were to be filed with the local government office.
Now to that evening. Max was in a whirlwind, he had been taken from the only life he had ever known (the orphanage) and was with people he that he had seen twice a day, (everyday) for the last 5 weeks and in a strange place (the apartment we were renting). Needless to say that none of us got very much sleep that night.
This blog will be continued next week, when we do a year in review from the day we got home until one year later.
Posted by Bill and Sheri at 11:56 AM 2 comments:

Life has been very busy, but good. Since I last updated, we bought a house! We are very happy to be in our new home. We have been very busy with life, but we are so thankful that God is so good to us!! I have several post I am working on, so keep checking back. I will have some pictures in my next post, so keep checking.

As we celebrate our son Max, and many others in this world like him, we hope that people everywhere will see that children with Down Syndrome truly are a blessing.
We hope that hearts will change and that we may soon see a day where a diagnosis of Down Syndrome is not "bad", a day when people stop aborting these blessings.
I am thankful for a day to CELEBRATE these amazing children and adults. A day to tell the world 'look at what you are missing out on', to convince the world to stop ending their lives, stop sending them to institutions where they have no hope, where they die. There are families everywhere who love these children and we want them to have hope, to have a chance at life, to feel the sun on their faces, to dance in the rain, to step into a puddle, to jump into a pile of leaves, to feel the beach sand between their toes. To see a rainbow, to walk in the park, to eat an ice cream cone, to swing from a tree, to blow dandelion wishes in the wind, tosee the falling snow, to make a snow angel, to smell the ocean breeze, to see the butterfly flutter by, to see the deer in the meadow with her fawn, to feel the mist from the waterfall, to see the Eagle soar, to smell the flowers, to see so many things, to experience so many things that we take for granted....our little Max does not take things for granted.....I will never forget the first time he danced in the rain, it was so precious, he did not care that some were thinking "people just don't do that', they scurry to get out of the rain. Max loved it, he seemed to see it as the blessing that God meant for the rain to be. I have tears, it truly was beautiful to see him dance in the rain. He also stops and smells the flowers....he does, if we are walking by, and he sees a flower, he will stop look at it and smell it. I know that he is blessed to see the little things in life that we are often to busy to notice, he sees the world they way I feel that God meant for us all to see it. Max has tought me many things, and he is a huge blessing to our family!! We Love Him<3
If EVERYONE KNEW WHAT WE KNOW, THERE WOULD BE NO MORE DOWN SYNDROME CHILDREN IN ANY ORPHANAGES ANYWHERE, AND THE ABORTION RATE FOR A DOWN SYNDROME DIAGNOSIS WOULD BE ZERO.

Our Beautiful Little Max is a blessing, may God get all the glory for Max's life! 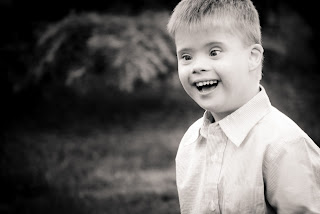 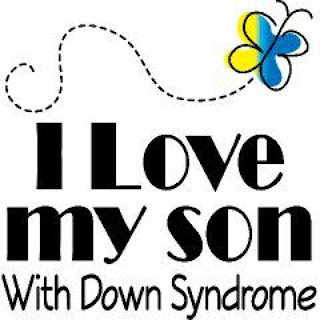 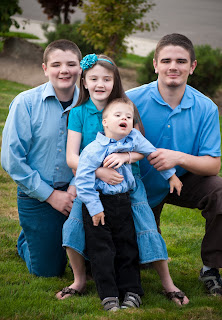 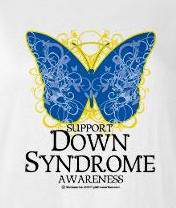 So when you see someone or meet someone that has Down Syndrome, please be kind, they just want to be accepted for who they are. 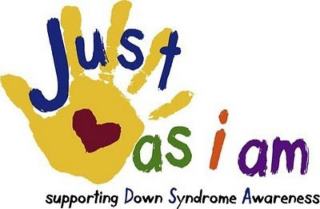 When Will He Be Ours?

Two weeks ago Max had tubes put in his ears. He had constant fluid in his ears that was not draining. It affected his hearing; they said that he was probably only hearing vowel sounds and not consonants. It would be like being underwater, trying to hear someone who was not underwater. The surgery went very well and the staff loved Max, they said he did beautifully.
Well, right before they took him back, they asked if we thought he would be okay, if he would be fine with them taking him back to surgery without mom and dad. And, before I even realized what was happening, out of my lips it went... I said... "This is the first time Max has not had one of us with him since he left the Orphanage"..YIKES...what occurred after that was very difficult. They said "he's adopted?" We explained, yes, we adopted him from the Ukraine. They went into{{ PANIC  M O D E}}. They said we need to see documentation of your adoption; we need to see the court documents. There was an exchange, it went back and forth for a bit. In all of the medical process, all the doctors' appointments and everything, this was the first time we had been asked for documentation. We have been asked at other times to provide the documentation. We have not kept it a secret; we have made it clear with all of these doctors' that he is adopted. We want him to get the best medical care possible. We do not know his entire medical history, and what we do know, we have discovered is not all accurate. At one point in the conversation the nurse said to us," you just told us he is adopted, and because you said that, we need to see the documents." I said to her, "if we back this conversation up five minutes, and I don't say anything about him being adopted then we would not need to prove he is ours?" She said "no". "But because I said he was adopted, now we need to prove it" "yes." We explained that he had been in that Doctors care for 3 months, it did not matter.
Now, back this up two weeks when we made his appointment for the surgery. During a phone conversation, telling us what to expect, they asked about allergies, he is allergic to citrus, so I explained that over the phone. She wanted to know what happened when he had citrus, I told her we did not know and I explained that he was adopted and gave her the info about citrus that the orphanage gave us. She said, you may need documentation of your adoption. So with that said we tucked it into his back pack and brought it with us. When we arrived for our appointment and we checked in, they did not ask for it, woohoo, or so we thought.
When you adopt a child, and you have to keep proving the he is yours, it is hard. We are so ready to be a forever family.
They did take Max back and he was fine, we did provide documentation. We did ask them to show us why they needed it, they brought in a simple office statement, but there was really no official legal law noted on it. She did explain, that sometimes if there is any kind of custody dispute that one parent  may not want the surgery, so that is why they ask for the documents. I told her that Max was abandoned the moment they said he has Down Syndrome. She said it is not unheard of for a parent to travel to stop a surgery. I said do you think that his parents who abandoned him at birth are going to leave the Ukraine and come here.... Lol...at this point the conversation was lighthearted, she said I know it is not fair. We said to her, when will he be truly ours?
We have had to provide documentation for other things; in fact one of the admin offices said "you'll need to carry documentation for a while." It is hard, we just want to be his forever family, we just want him to be seen as and treated as the child he is..OURS, we want to be seen as and treated like the parents we are.. HIS.
With all that has been said and done, we know he is ours, a blessing of the LORD! And we are so very thankful for him. After the fact, I realized, he does go in to his  Church Wednesday class without us, and he does well. Our children also take care of him when Bill and I are not home. So he has been without mom and dad. When MAX came out of surgery, into recovery, they came to get us. They picked him up, put him in my arms and I was blessed to have some cuddle time with my little man. He was so adorable trying to "wake up" We love him!! 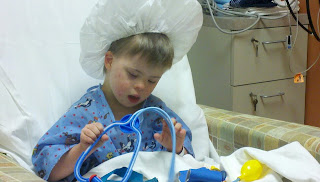 This is Max before he went into surgery. The same nurse that gave us a hard time, let Max play with the finger monitor thing......he broke it :) I warned her he is special needs, and does not know about those types of things, that he would think it was a toy and...well... before I finished warning her, Max broke it. Bill picked it up and looked, he said it is so busted. Oh well, Max had fun :)
Posted by Bill and Sheri at 4:27 AM 4 comments:

Email ThisBlogThis!Share to TwitterShare to FacebookShare to Pinterest
Older Posts Home
Subscribe to: Posts (Atom)
Now unto him that is able to do exceeding abundantly above all that we ask or think, according to the power that worketh in us, Unto him be glory in the church by Christ Jesus throughout all ages, world without end. Amen. Ephesians 3:20 & 21

View my complete profile
US Flag